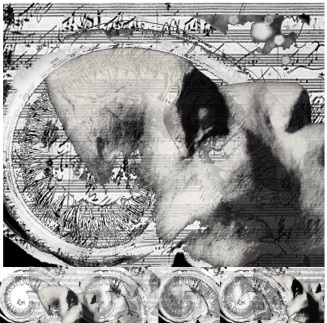 And Beethoven Heard Nothing had its beginnings in an idea to re-mix Mauricio Kagel’s multi-media Beethoven-inspired work Ludwig Van. The project coalesced instead into the creation of a new work using the practice of facilitated composition within a context that was more akin to performative installation than concert.

Musicologist Dylan Robinson and composer Tina Pearson developed a concept linking haptic and sonic elements of performer and audience perception in an exploration of Beethoven’s changing hearing juxtaposed with his musical sound world. Robinson’s proposal of large white paper screens as a way to rearrange the visibility of the performance space and performers, and as projection surfaces for light and image, brought a new kind of structure for the creation of musical relationships for the ensemble. Pearson developed sonic exercises and improvisation structures for the ensemble, focusing alternately inward on the hearing process to invite an inner rearrangement of sound perception for musical interplay and performance; outward on proximity, placement and movement of the musicians in the physical space.

At each rehearsal, the ensemble began by wearing earplugs to focus listening attention on the inner sounds of their individual physical systems, and then replicating these sounds as accurately as possible with their instruments and other soundmaking sources. This evolving practice became the core attention of the work, creating a juxtaposition of heartbeats, tinnitus, the nuances of hearing, listening and hearing loss with musical interpretation and invention.

Beethoven’s music was brought to the project through the ensemble members. Each musician was invited to choose a specific Beethoven musical fragment for the ensemble to explore in this context, bringing ideas about story and shape from individual perspectives, experiences and sensibilities.

Timothy Gosley’s experiments with low-tech live video and projection techniques were a fit for both the sensibility of the ensemble and for the project. Tim participated in the exercises throughout the development of the piece. His light play became an integral element that shaped the narrative while giving a shifting visual architecture for the sonic exploration.

“Tones sound, and roar and storm about me until I have set them down in notes.”

Beethoven was completely deaf by the time he composed his later works such as the Ninth Symphony, the late String Quartets and Missa Solemnis. Over a twenty-year period, starting when he was about twenty-seven years of age, Beethoven experienced gradual hearing loss combined with severe Tinnitus. That he continued to compose and perform such music as he did is an astonishment that guided this project.

The path of sonic narrative for the project “…And Beethoven Heard Nothing” is dependent on its venue and the performers involved. It begins with a focus on inner hearing, and unfolds in an exploration of the relationship between vision and sound, and ways that the processes of hearing and its nuances can be juxtaposed and combined with ‘musical’ material. A regular practice of listening to ear and body sounds while wearing ear plugs give foundation to an ensemble for bringing these sounds and their visual representation into musical interplay, for creating the sounds of imagined Tinnitus, and for playing with silence. These elements were absorbed into the Beethoven fragments and improvisations, creating a blur between ‘noise’ and music; inviting the “roaring, buzzing, ringing and hissing” of Beethoven’s tinnitus into a redefined soundworld in which to meet his iconic musical mind.

LaSaM’s “…and Beethoven Heard Nothing” performances at Knox Presbyterian Church Merlin’s Sun Home Theatre in Victoria in May and October 2010 were a resonant success. The pre and post concert talks were full of illuminating ideas, responses, and heartfelt interactions with those who attended. Listening so deeply to inner sounds together seems to create an immediacy and intimacy in which to share experiences without the usual walls and masks.

At its base, “And Beethoven Heard Nothing” is a structured improvisation by Victoria’s LaSam that uses Beethoven’s deafness as an occasion to meditate on individual experiences of tinnitus and hearing loss, specifically focusing on how these episodes relate to listening, performing, and conceptualizing music. In some ways, the final result of LaSam’s production is the exact opposite of what Beethoven has come to represent, substituting a haunting inevitability for the latter’s famous dramatic drive. And yet, might there not be a special and specific truth to this? Surrounded by dancing shadows that strain to speak in every way imaginable—instrumental squawks and moans, melodic fragments, multilingual vocalizations, projected historical relics, electronic and physical spatializations, and even the internal machinations of our own ears—the listener hears a tract of time that contextualizes Beethoven work. In this, LaSam finds a breadth that lends breath where the individual symphonies would shout, so that we are led away from the Romantic pathos that has made a caricature of the human being named Beethoven, and towards a deeper empathy for the inexorability of his progressive deafness…a painful progression that LaSam’s work suggests—to my ears—looms close by for all of us who value our hearing in a culture that relentlessly attacks our ears.
For information and score, contact tina<dot>pearson<at>shaw<dot>ca

And Beethoven Heard Nothing was funded by the British Columbia Arts Council. LaSaM is grateful for the support of the Knox Presbyterian Church, Merlin’s Sun Home Theatre and the University of Victoria School of Music for providing rehearsal space.