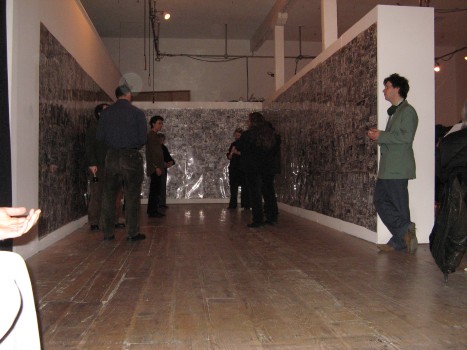 Quantal Strife Sound is a project that stemmed from improvisation, facilitated composition, instrument building and voice workshops for musicians, artists and community members curated by Tina Pearson at Open Space in Victoria, BC between 2006 and 2008.

The project was instigated by an invitation by the Victoria Symphony to local new music presenters to program events during its New Currents Festival of New Music. The visual arts installation Quantal Strife was scheduled at Open Space during the Festival dates, inspiring a project that would invite Victoria community members and artists to participate in a “sounding” of the ideas and presence of the three artworks involved. Quantal Strife was curated by Sally McKay, and featured the work of artists Scott Caruthers, Crystal Mowey and Marc Ngui.

Tina Pearson (director), vocalist/composer Cathy Lewis and composer Chris Reiche, developed simple sound pieces for the participants, inspired by the ideas circulating in Quantal Strife. The Quantal Strife Sound project explored mutual and conflicting themes and languages between the two disciplines through a series of investigations that, like the Quantal Strife installation, focused on the process of art-making itself and our role in that art.

ONE Performed within the Scott Carruthers installation of drawings. Instruction: “‘In the beginning, when sound is choked out of us …’ On only one note, explore as many sounds, stories, textures, dynamics, rhythms, connections as possible. Listening for new sounds, listening to other sounds, listening to the relationships between sounds, stay on one note. Maintain clarity of intention, rather than automatic repetition – always intensely aware of what you are playing and how you are listening.”

Audio: Click here to hear an excerpt of One, a sound piece inspired by the process used by artist Scott Caruthers to create his installation for Quantal Strife. Recording by Jeff Morton.

VANTAGE Performed in any location in the gallery space within the three Quantal Strife installation. Menu: COPY, DO NOTHING, ONE NOTE, FRENZY, MOVE, STATIC. This is an opportunity to move through the room, move near or from other players, move to ensemble set. The choices for gestures / sounds are not restricted to one breath length. Variable durations, dynamics, contrasts, textures are encouraged. One menu item could be chosen for the entire piece, for example, varying within this option. Or  more than one menu item can be performed at  the same time, such as STATIC on ONE NOTE while COPYing, or FRENZIED STATIC, or MOVE while COPYING, etc. This piece gives opportunities to connect with other players in various ways and opportunity for extended focused improvisations within smaller ensembles.”

PLATEAU “…come up with a different image each time. Quickly, without planning.” – Scott Carruthers. BREATH MEDITATION: 3 breaths. To begin, completely exhale all air from lungs through mouth – as if gently blowing a candle flame. Once the exhale is complete, instead of automatically inhaling, wait a few seconds for the inhale to happen of its own accord, inhaling through the nose. Complete 3 breath cycles, beginning PLATEAU on the 4th exhale. Score: On each inhale of your natural breath rhythm, invite or notice a short sound story / moment to come into your mind. On each exhale, perform the complete sound story as accurately as possible. Each story should be different from its predecessors, with each inhale bringing a completely new sound story. Let each story be be complete in and of itself, and not intentionally relate to, vary or connect with other stories of yours or that you hear from others. Use only one instrument / sound source, exploring different ways of telling your exhaled sound stories /  moments through variations in pitch, rhytym, texture, dynamic, intensity, speed, gesture, memory, technique, etc. Some techniques could include blowing, scraping, hitting, tapping, slapping, intoning, waving, rubbing, etc. Take at least 2 rest periods during the piece, again repeating the 3-breath cycle meditation.

OF THE REFRAIN For vocal soloist and ensemble of mixed instruments. The soloist recites a section of the chapter “Of the Refrain” from the book A Thousand Plateaus by Gilles Deleuze and Félix Guattari, whose ideas inspired the Quantal Strife work by artist Marc Ngui. The ensemble performers each have 2 or more words to perform during the recitation of the text. The words are from a set of 20 pulled from the soloist’s text: marshals, preexist, function, sings, landmarks, loops, knots, speeds, customary, sublime, germinal, home, sonorous, carries, intra-assemblage, circle ethos, crack, stable, refrain. Performance variations: 1) Speak each word as if talking normally, including the usual possible contextual variations in dynamic, speed, intonation, emotion. 2) Speak separate syllables or letter sounds of the word, as they would sound in regular speech (not singing). 3) Sound smaller particles of the sounds of each syllable or letter sound stringing them together (ie shshshshsh, or t ttt t tt tttt) or sporadically and separately. In all variations, the soloist recitation should be heard and not obscured by the ensemble’s utterances. The performers should sound the separate words, syllables and letters as if they have escaped from the page and are rising out into the space of the installation. The performance ends when the soloist has completed the recitation of the text, closes the book, and after the remnants of the performers’ word fragments echoing into the space have disappeared.

MANY TRAINS Location: performers spread in a circle around the Crystal Mowbry train sculpture within Quantal Strife, no less than 8 feet from the track, at varying distances to the walls and installation boundary. Score: Each performer recalls a location in her or his life that has particular poignant meaning, whether they have been to this location or not. Each performer creates a short sound piece evoking this location – a song or other musical piece, a soundscape, a repeated sound memory or a text story. Each person chooses a location on the scale model that represents the remembered location / memory. As the train proceeds along the track, each performer begins her or his sound story when the train reaches her or his location. If the performer’s sound story is longer than the duration of the train’s journey around the track, the performer shall begin again at each repetition. Each performer performs her or his sound story 4 times. The piece ends when all have completed.

Michael Benneyworth, Pamela Millar, George Tzanetakis, Diane Taylor, Ernest Cholakis, Chris Reiche, Humter Boucher, Jeff Morton, Cathy Lewis, Colin Dyer and Tina Pearson, performed Quantal Strife Sound within the Quantal Strife installation at Open Space on January 28, 2008 to an enthusiastic audience. Some of the performers had not previously performed in public nor had they played musical instruments. Others were amateur or professional musicians.